About ONE THIRD Photo Exhibition 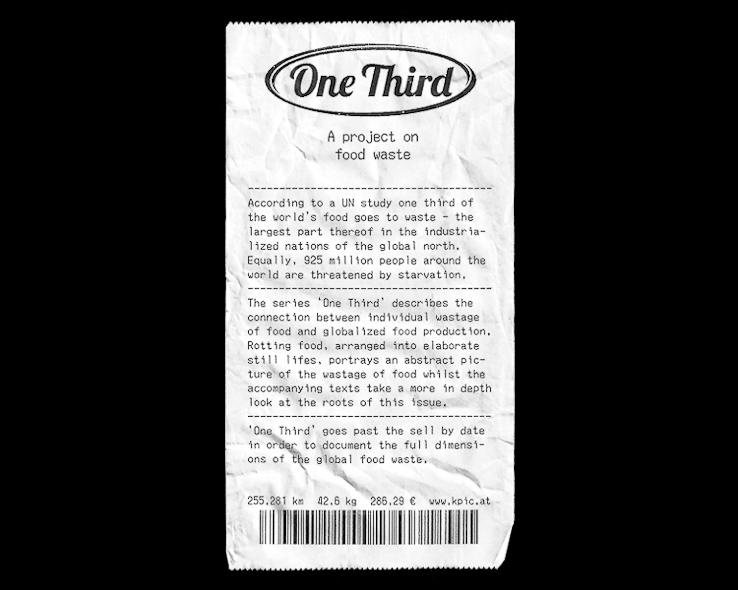 In 2011, Austrian photographer Klaus Pichler came across a then newly published survey of the FAO (Food and Agriculture Organization of the United Nations) which stated that one third of the world’s food goes to waste. This left him shocked and he almost immediately decided to create a photo series on this issue.

The title of his photo series- One Third – refers to this particular percentage of food products which, according to the FAO study, goes to waste worldwide. Food products come with their own individual history and are produced in various ways in different parts of the world. They only have one thing in common: large amounts of them are thrown away.

The immediate idea behind this series was to picture food products at different stages of decay in order to highlight the issue of food waste. The products used for this study were once tasty items of food, for sale in supermarkets after being transported there from various parts of the world. Pichler’s aim is to link the issue of global food waste and food loss with the international food production and transportation situation.Therefore, each picture is accompanied by a caption label which lists the ‘personal history’ of each item.

Food waste in industrial countries is strongly linked to the culture industry and therefore also to people’s ways of life. In the photographs, this is made obvious through the combination of food with accessories of the culture industry focused around food (e.g. dishes, cutlery). Therefore, the pictured food items are portrayed as part of a European culinary culture and history. This culture is closely intertwined with the history of exploitation of European colonies and, as a result, the import of cheap food products from other continents. Because of these historical aspects, an artistic examination of the issue of food waste in industrial nations of the 21st century has no alternative but to give consideration to geopolitical inequalities which have developed throughout history.

The products used for this project originated in various parts of the world, ranging from locally sourced products to those who have been transported over tens of thousands of kilometres. The majority of the pictured products are unprocessed food items, as it is possible to trace their origins and to examine production methods. This is usually difficult with processed food, however, even though this would be particularly informative as the transport distances covered by the various ingredients would add up to an unbelievable number of kilometres.

The selection of food products ranges from staple foods, dairy products, meat, cereals, to fruit and vegetables, sweets and exotic delicacies. As a result, it covers the whole spectrum of items which are found on our plates. The ingredients used for this project were all bought- predominantly in supermarkets- in order to be left to rot and to finally be disposed of after the photographs had been taken. Of course, this should be considered to be provocative: Consumers do not waste food on purpose, it ‘happens’ as an unwanted side effect. In this project, however, food products are wasted consciously and purposely to document the full dimension of global food waste.

<< return to main page
<< about the project
<< about LOHAS experience
<< FAQ